Because Jesus lives forever, he has a permanent priesthood. Therefore, He is able to save completely those who come to God through Him, because He always lives to intercede for them.

Reflect:
The Church of Saint Peter in Gallicantu is built on a hillside on the eastern slope of Mount Zion in Jerusalem.  This Church commemorates Peter’s denial of Jesus.  According to tradition, the church of Saint Peter in Gallicantu (Latin for “cock crow”), is built over the ruins of the house of Caiaphas, the high priest in Jerusalem at the time.  We are told in Scripture that it was at the house of the high priest where Jesus was condemned to death by the chief priests and elders, before being handed over to Pilate in the early hours of that Friday morning. 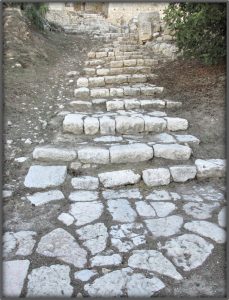 Beside the Church, excavations have brought to light a stepped street which in ancient times would have led from Mount Zion down to the Kidron Valley.  It is possible that these stone steps were in use at the time of Christ, and if so, on the evening of his arrest, Jesus may have been led up this way, bound and under heavy guard, to the house of the High Priest where the Sanhedrin would assemble for a trial.

As I stood at the base of these steps several years ago, I wondered what would have been going through Peter’s mind that night as he climbed the steps, his heart pounding through his chest, following at a distance right up into the courtyard of the high priest where he warmed himself by a fire.  When he was questioned about his relationship with Jesus, Peter distanced himself even further, and denied three times knowing him.   At that moment, a rooster began to crow.  “Then Peter remembered the word the Lord had spoken to him: ‘Before the rooster crows today, you will disown me three times.’ And he went outside and wept bitterly. (Luke 22:61-62)

As he broke down and wept over his own failure, could Peter remember something else Jesus had said to him in the upper room just hours earlier?…before the mention of denial and a rooster crowing?  “Simon, Simon, Satan has asked to sift all of you as wheat.  But I have prayed for you, Simon, that your faith may not fail. And when you have turned back, strengthen your brothers.” (Luke 22:31-32)

Peter may have thought it was all over, but where was Jesus?  The One, who is over all creation, was heading for the cross where he would suffer and experience the agony of being forsaken by God as he took upon himself the sin of us all.  For God made Jesus who had no sin to be sin for us so that in him, we might become the righteousness of God. (2 Corinthians 5:21)

Jesus told Peter that he was praying for him, that his faith would not fail. Three decades after this night, the lowest point in Peter’s life, he wrote: “And the God of all grace, who called you to his eternal glory in Christ, after you have suffered a little while, will himself restore you and make you strong, firm and steadfast.” (1 Peter 5:10) The only reason Peter could write this was because he had experienced the truth of it in his own life.  His faith may have been bruised for a time, but empowered in the Holy Spirit, he turned back, strengthened others in the faith and encouraged them to follow “in Jesus’ steps.” (1 Peter 2:21)

There may have been times in our lives when because of failure or denial or following Jesus at distance, we have felt defeated or disqualified…as if it’s all over.   But thank God that “Jesus is able to save completely those who come to God through him, because he always lives to intercede for them.”  Jesus is praying for you, that your faith may not fail and He will make you strong, firm, and steadfast.

“Who will bring any charge against those whom God has chosen? It is God who justifies.  Who then is the one who condemns? No one. Christ Jesus who died – more than that, who was raised to life – is at the right hand of God and is also interceding for us.”

Spend some time in prayer, offering gratitude to the God of all grace for demonstrating His unfailing love to us in that while we were still sinners, Christ Jesus died for us, and that He always lives to intercede for us.

Ask the Lord to bring to mind someone you know who needs strengthening in their faith today?  Pray for them.

But I Have Prayed For You

As we journey toward the celebration of Easter, the pastors at EastRidge Church have pulled together some daily devotionals to encourage your hearts. We want to acknowledge that the themes for the next two weeks have been drawn from the BIC denomination’s 2020 Lenten Devotional Study.